Last month the girls of the 54th Brownies enjoyed a concert at the Orpheum Theatre in downton Vancouver called Latin Beats Heroic Feats. The Vancouver Symphony Orchestra put the show on as a part of their Kids’ Koncerts series.

Especially exciting was the opportunity visit the VSO Instrument Fair in the hour before the show. The girls got some hands on exposure to a variety of instruments. 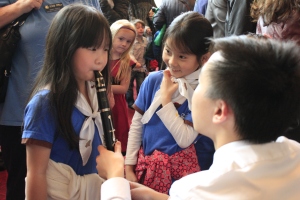 Performers were available with several different instruments to give kids personal demonstrations and a chance to try them themselves. The girls had a chance to try a cello, violin, flute, oboe, bass clarinet, and more! 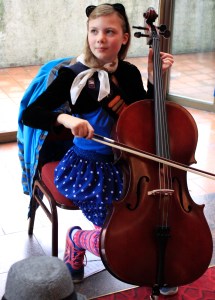 There was even a craft station — always a bit hit with Brownies! — where the girls got to make their own carnival masks, which later became a part of the interactive show. 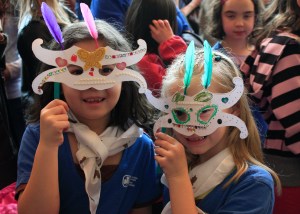 The orchestra performed a number of musical pieces from across North and South America in an interactive show designed for kids aged four to eleven years old. Clowning and puppetry were also used to stage a story about a young boy’s travel through time and space, learning all about music and rhythm. 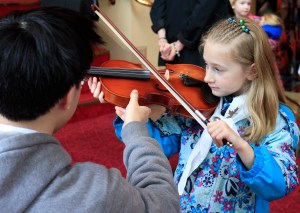 Once again the girls impressed everybody with how well behaved and engaged they were through the whole experience. This unit visited the symphony last year as well and when Brown Owl asked what kinds of outings and activities they wanted to plan this year, there was an overwhelming desire to see the symphony again.

1 thought on “Brownies Experience the Orchestra”