Brownies from three units gathered for the weekend at Camp Capilano in beautiful North Vancouver to camp out ancient Greek style. After conducting a poll of all three units, the girls chose the theme Greek Mythology for their weekend.

The girls had a great time making new friends and enjoying the wonderful camp facilities. As part of their afternoon Olympics, the girls spent time Poseidon adventuring in the heated outdoor pool. 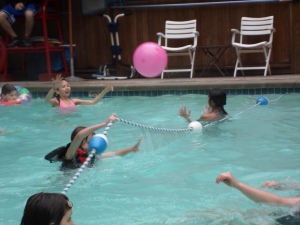 They also learned how to use camp stoves as part of their camping badges. They worked together to make some fruit of the gods jam to bring home to their moms for mother’s day.

It wouldn’t have been Brownie camp without a campfire including all their favourite songs, and roasting marshmallows for s’mores. 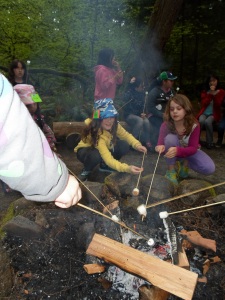 And the girls danced the night away at their toga party wearing the awesome toga nighties they made earlier in the day. 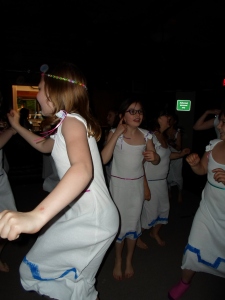 It was a wildly successful camp. Thank you to the leaders from the 24th Brownies, the 54th Brownies, and the Highlands Brownies for working together to pull this off. Also, a thank you to the couple of Guides who came along to act as patrol leaders, showing great leadership and fun attitudes.