Happy Halloween from Burnaby Mountain District! Lots of units are getting up to festive fun this week, but perhaps none quite so earnestly as the 14th Pathfinders who spread Halloween into a multi-part event!

The group decided to check out the local Burnaby Village Museum, which puts on a great haunted attraction for Halloween.

There can be lots of spookiness in history. Highlights included a spontaneous conga line street party! 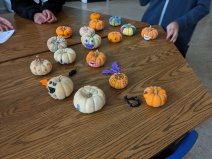 But that’s not all. The group also recognized Halloween at regular meetings where they first spent a day making great Halloween decorations for the next week when they had a fun spooky party with snacks and games.

You’ve got to admire this group’s dedication to the season! Looks like a great time was had by all.

This week, the girls in the 22nd Burnaby Mountain Guides had a Halloween party! The girls took a break from their regular Girl Guide uniforms and came in costume because of the special occasion. 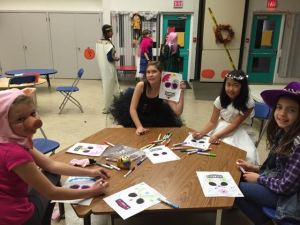 Crafts are a favourite activity of these girls. At the party they coloured Día de Muertos masks, and also did a spooky pumpkin seed tree craft. 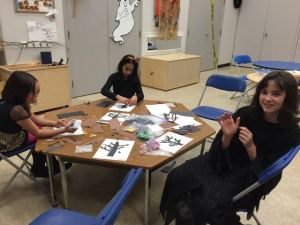 And it wouldn’t be a party without games and treats. They rounded out the evening with pumpkin bowling and decorating a pumpkin-shaped rice krispie treat!

Many units are celebrating with Halloween parties this week. Thank you Guides for sending in these fun photos.

To get the year off to an awesome start, the 54th Brownies had a sleepover in September. It was themed like a Hawaiian luau! 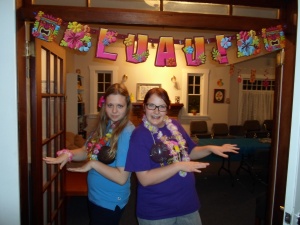 Junior leaders at the entrance to the Luau

Heritage home Richmond Guide House was decorated to become to newest Hawaiian island. Girls were greeted by leaders with leis and went on to make their own floral hair pieces. After a pizza dinner (you guessed it, Hawaiian flavour!) the girls made their own coconut bras and donned grassed skirts.

Spicy Owl is helping a Brownie with her costume

Once they were all outfitted, it was time to dance! Hula style, of course.

Before long they were expert hula dancers

The night time snack was pineapple ice — a delicious treat made by freezing pineapple juice and grinding it through a snow cone maker.

A big thank you to all the leaders and Rangers who made this event possible. The girls had a great time!

Early in the Guiding year the girls of the 54th Brownies were very clear about one thing that they wanted to do this year. They wanted to have a DANCE PARTY.

Brown Owl wasn’t too sure what to make of their request at first, but as they continued to show interest in pop music and making dance routines and singing together during regular meetings, it became clear that this was something they should pursue.

So for their second sleepover of the year, the group rented a hall in the community for the night. The leaders decorated with music-themed decorations. The girls made a craft out of recycled CDs. But the biggest hit was the disco light that showed three different colours and kept to the pace of the music that was playing. 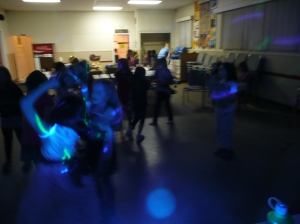 The girls made dance routines in patrols to some of their favourite pop songs. They also did “traditional” dances like the Chicken Dance, the Macarena, and the YMCA. The danced enthusasitically, even singing along to the chorus of Brown Owl’s favourite song (Bon Jovi’s “Living on a Prayer”) taught to them by some of the other leaders.

It was a night of Kelly Clarkson, and Justin Beiber, One Direction, and Taylor Swift, and so many more — and a really fun night that neither the girls nor the leaders are likely to forget.

Last weekend the 1st Burnaby Mountain Sparks had a sleepover pizza pajama party at Richmond Guide House. It was a great opportunity for the girls and leaders to get to know each other — and with the unit having 10 new girls, 2 new junior leaders, and 1 new Guider this year,  this seemed pretty important!

Dinner, of course, was pizza. One of the highlights was the “movie theatre” where the girls got to watch The Lorax projected onto the wall. And it wouldn’t be a movie theatre without popcorn!

Getting ready to watch the movie

In the morning everyone was pretty sleepy, but a good time was had by all. The girls made new friends and some really great memories of their early days in Sparks. 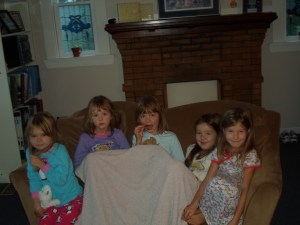 Everyone is now excited for some of our upcoming events. Did you know that the Lorax speaks for the trees? He says that “UNLESS someone like you cares a whole awful lot, nothing’s going to change. It’s Not.” Hmm. I wonder what we could do if we had some trees… Stay tuned!